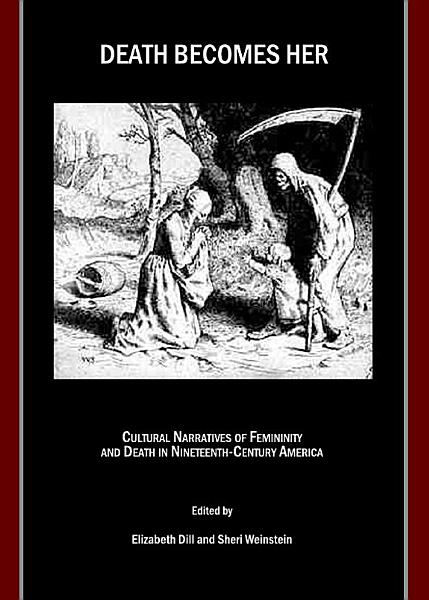 Dead and dying women are surely an age-old narrative trope. While associations of femininity with death have become almost prototypical in literary criticism and are familiar fodder for cultural conversations, the editors of Death Becomes Her offer us an opportunity to investigate the values that underlie such associations. But from where does our tireless investment in what constitutes a feminine death, a feminine reaction to death, and death’s courting of women emerge? These essays give voice to the idea that power and victimization are not opposites, but rather are complements in an operatic fantasy of intrigue, agency, absence and presence that pervades American writing and experience. Each chapter of Death Becomes Her offers a different lens to investigate the nature of death as surely more than just an anatomical matter: The penny press obsessively covers the death of a beautiful prostitute in 1840s Chicago; a novel of seduction becomes also a narrative of autopsy; a story of haunting allows women outlets for sexual license and the polemics of desire. Overall this volume invites readers to explore the ways in which death is portrayed as both an ornamentation of femininity and an ontological reality of it: how, put simply, “death becomes her.” Essays include analyses of women’s deathbed scenes, suicides, murders, funerals, and autopsies in literature and other nineteenth-century media. As such, the chapters in Death Becomes Her show how the authorial and readerly interest in scripting and staging women’s deaths is both intricate and abiding. They tell us that death is never, of course, simply about death, and they make relevant other issues, from linguistics to politics, as they inform the literature and lives of women from the late-eighteenth to early twentieth-century America. Taken together, the pieces in Death Becomes Her allow us greater access to the surrounding culture out of which the American woman emerges, performs, lives and dies. In doing so, they offer fresh insight into the often unsettling and highly relevant role of death in feminism.

Authors: Elizabeth Dill, Sheri Weinstein
Categories: Literary Criticism
Type: BOOK - Published: 2009-05-05 - Publisher: Cambridge Scholars Publishing
Dead and dying women are surely an age-old narrative trope. While associations of femininity with death have become almost prototypical in literary criticism and are familiar fodder for cultural conversations, the editors of Death Becomes Her offer us an opportunity to investigate the values that underlie such associations. But from

Authors: Halbert W. Hall
Categories: Language Arts & Disciplines
Type: BOOK - Published: 1997 - Publisher: Libraries Unlimited
This ambitious work provides single-point, unified access to some of the most significant books, articles, and news reports in the science fiction, fantasy, and horror genres. Entries are arranged in two sections-author (subarranged by title) and subject-and may have up to 50 subject terms assigned. No other reference tool addresses

A Critical Companion to Robert Zemeckis

Authors: Adam Barkman, Antonio Sanna
Categories: Performing Arts
Type: BOOK - Published: 2020-10-15 - Publisher: Lexington Books
A Critical Companion to Robert Zemeckis offers a comprehensive, academic and detailed study of the works of Robert Zemeckis, whose films include successful productions such as the Back to the Future trilogy (1985-90), Forrest Gump (1994), Contact (1997), Cast Away (2000) and The Polar Express (2004), but also lesser known

Authors: Rosemary Betterton
Categories: Art
Type: BOOK - Published: 2013-10-18 - Publisher: Routledge
An Intimate Distance considers a wide range of visual images of women in the context of current debates which centre around the body, including reproductive science, questions of ageing and death and the concept of 'body horror' in relation to food, consumption and sex. A feminist reclamation of these images