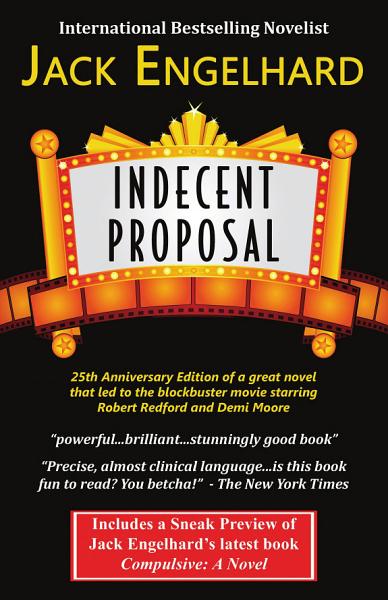 Reviewers have called it "powerful" and "brilliant." Newly released for its 25th anniversary edition, Jack Engelhard's novel "Indecent Proposal" has found its place alongside such classics as Fitzgerald's "The Great Gatsby" and Tolstoy's "Anna Karenina." "Indecent Proposal" remains one of the most widely-read and discussed novels around the world, due to the strong writing and riches that include a moral dilemma for the ages. The novel was translated into more than 22 languages, and Hollywood produced a mega-hit movie based on this book starring Robert Redford and Demi Moore. The novel stands as a remarkable achievement from a great and legendary novelist. Though Hollywood only skimmed the surface of Engelhard's masterpiece, the theme is eternal, even biblical - temptation The plot has riveted the world's readers and moviegoers. A destitute couple tries their luck in an Atlantic City casino. The wife, Joan, is utterly gorgeous. She attracts the attention of an oil rich sultan who can buy anything he sets his eyes on. Can he buy people? Can he "buy" Joan? What would you do for a million dollars? Reviews "Precise, almost clinical language...is this book fun to read? You betcha " "- The New York Times" "The prose is vivid, cool and muscular, the story is great. In all, the fine tension between desire and high moral principal make "Indecent Proposal" a well-crafted book...well-wrought characters, exhilarating pace...it's beautifully written." "- The Philadelphia Inquirer" "A gut-wrenching study on love, money and trust." "- National Public Radio (NPR)" "Written with the sparseness of Hemingway but the moral intensity of I.B. Singer." - Michael Foster, author of "Three in Love" (HarperCollins) About the Author Contemporaries have hailed novelist Jack Engelhard as "the last Hemingway" and of being "a writer without peer and the conscience of us all." "The New York Times" commended the economy of his prose... "precise, almost clinical language." His bestselling novel "Indecent Proposal" made him internationally famous as the foremost chronicler of moral dilemmas and of topics dealing with temptation. Works that followed won him an even greater following, such as "Escape From Mount Moriah," his book of memoirs that won awards for writing and for film. His latest novel "Compulsive" draws us into the mind of a compulsive gambler in a work stunningly brilliant and original, and seductively readable. Engelhard writes a weekly column for "The Washington Times." His website: www.jackengelhard.com

Authors: Jack Engelhard
Categories: Fiction
Type: BOOK - Published: 2013-07 - Publisher: DayRay Literary Press
Reviewers have called it "powerful" and "brilliant." Newly released for its 25th anniversary edition, Jack Engelhard's novel "Indecent Proposal" has found its place alongside such classics as Fitzgerald's "The Great Gatsby" and Tolstoy's "Anna Karenina." "Indecent Proposal" remains one of the most widely-read and discussed novels around the world, due

Authors: Blair Babylon
Categories: Fiction
Type: BOOK - Published: 2020-10-10 - Publisher: Malachite Publishing
From USA Today Bestselling Author Blair Babylon . . . Book 1 in the Brand New Billionaires in Disguise: Maxence Series . . . ”Phenomenal read!" "A can't put it down book for me." "Now THIS is what I consider phenomenal writing!" "Simply genius." "Oh, I am in love with

Authors: Judy Angelo
Categories: Fiction
Type: BOOK - Published: 2016-04-21 - Publisher: Phoenix Publishing Limited
GIVE ME A BABY...NO STRINGS ATTACHED Melanie Parker is at the top of her game. Thirty-three years old, owner and CEO of Parker Broadcasting Corporation, with assets totaling over a billion dollars. There are many who would die to be in her shoes. But there’s one thing Melanie feels is

Authors: Sandra Marton
Categories: Fiction
Type: BOOK - Published: 2016-08-01 - Publisher: Harlequin
Harlequin Presents offers you another chance to enjoy this bestselling novel from Sandra Marton. The boss’s marriage demand! When Cade Landon planned to return his late father’s oil company to its former glory he expected a challenge—but not in the form of feisty manager Angelica Gordon. She’s different from any

Authors: Ally Blake
Categories: Fiction
Type: BOOK - Published: 2008-09-01 - Publisher: Harlequin
A millionaire magnate had her phone! When Chelsea realized she'd accidentally swapped cell phones with someone, she knew how this would play out: she'd trek back into town, swap phones with some middle-aged man with a paunch and be on her way. …now he wanted her body! Only, seriously sexy

Authors: Emilie Rose
Categories: Fiction
Type: BOOK - Published: 2007-06-01 - Publisher: Silhouette
Would she accept one million euros to be his mistress for a month? How could practical American Stacy Reeves say no to Franco Constantine's proposal? The wealthy, arrogant CEO of Midas Chocolates was overwhelmingly passionate in his pursuit. Their union would be pure pleasure…. But Stacy did not know Franco's

Authors: Katee Robert
Categories: Fiction
Type: BOOK - Published: 2016-08-30 - Publisher: Hachette UK
Cillian O'Malley has been too close to death one too many times--first with his brother killed and then getting shot himself. He wants nothing more than to be done with the family "business," a desire made even stronger when he meets Olivia, the new bartender in his favorite hangout. She's