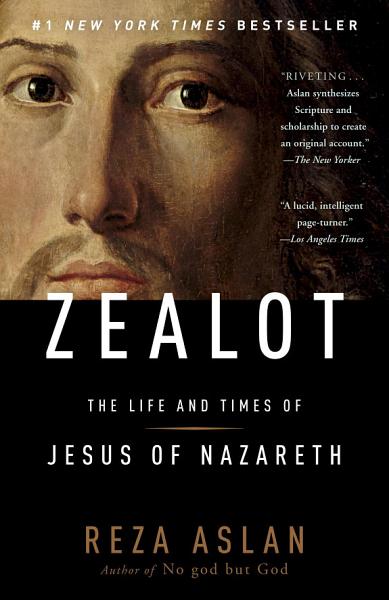 #1 NEW YORK TIMES BESTSELLER • “A lucid, intelligent page-turner” (Los Angeles Times) that challenges long-held assumptions about Jesus, from the host of Believer Two thousand years ago, an itinerant Jewish preacher walked across the Galilee, gathering followers to establish what he called the “Kingdom of God.” The revolutionary movement he launched was so threatening to the established order that he was executed as a state criminal. Within decades after his death, his followers would call him God. Sifting through centuries of mythmaking, Reza Aslan sheds new light on one of history’s most enigmatic figures by examining Jesus through the lens of the tumultuous era in which he lived. Balancing the Jesus of the Gospels against the historical sources, Aslan describes a man full of conviction and passion, yet rife with contradiction. He explores the reasons the early Christian church preferred to promulgate an image of Jesus as a peaceful spiritual teacher rather than a politically conscious revolutionary. And he grapples with the riddle of how Jesus understood himself, the mystery that is at the heart of all subsequent claims about his divinity. Zealot yields a fresh perspective on one of the greatest stories ever told even as it affirms the radical and transformative nature of Jesus’ life and mission. Praise for Zealot “Riveting . . . Aslan synthesizes Scripture and scholarship to create an original account.”—The New Yorker “Fascinatingly and convincingly drawn . . . Aslan may come as close as one can to respecting those who revere Jesus as the peace-loving, turn-the-other-cheek, true son of God depicted in modern Christianity, even as he knocks down that image.”—The Seattle Times “[Aslan’s] literary talent is as essential to the effect of Zealot as are his scholarly and journalistic chops. . . . A vivid, persuasive portrait.”—Salon “This tough-minded, deeply political book does full justice to the real Jesus, and honors him in the process.”—San Francisco Chronicle “A special and revealing work, one that believer and skeptic alike will find surprising, engaging, and original.”—Jon Meacham, Pulitzer Prize–winning author of Thomas Jefferson: The Art of Power “Compulsively readable . . . This superb work is highly recommended.”—Publishers Weekly (starred review)

Authors: Reza Aslan
Categories: Religion
Type: BOOK - Published: 2013-08-08 - Publisher: Saqi
From the internationally bestselling author of No god but God comes a fascinating, provocative and meticulously researched biography that challenges long-held assumptions about the man we know as Jesus of Nazareth. Two thousand years ago, an itinerant Jewish preacher from Galilee launched a revolutionary movement proclaiming the 'Kingdom of God',

Authors: C. Vonzale Lewis
Categories: Fiction
Type: BOOK - Published: 2022-03-22 - Publisher: The Parliament House
"Lacing magic and demons, the author takes us on a freefall ride of terror and violence as Nicole and her friends take on the monsters that hide and feed on the innocent." - Dave Wickenden, Author of Homegrown "Nicole's battle with her past, while trying to come to terms with

Authors: D.M. Mark
Categories: Fiction
Type: BOOK - Published: 2017-09-21 - Publisher: Hachette UK
Two men seeking the bones of a martyr stumble upon the crimes of a devil in the stunning historical crime novel by bestselling author David Mark. Hull, 1849: a city in the grip of a cholera outbreak that sees its poorest citizens cut down by the cartload. Into this world

Authors: Braxton DeGarmo
Categories: Fiction
Type: BOOK - Published: 2016-02-16 - Publisher: Christen Haus Publishing
Who is trying to eliminate the British Royal Family? And why? After all, the monarchy is largely ceremonial and symbolic. What does the Stone of Destiny have to do with an ancient Biblical promise? Where is the Throne of David? God promised David that someone would sit on his throne

Authors: Jerry B. Jenkins
Categories: Fiction
Type: BOOK - Published: 2015-12-21 - Publisher: NavPress
This collection bundles the entire 3 volumes of Jerry Jenkins’ popular Underground Zealot series together in one e-book, for one low price! #1 Soon Paul Stepola, an agent working for the National Peacekeeping Organization (NPO), has been assigned to enforce compliance with the world government’s prohibition on religion. Paul relishes

Authors: Donna Lettow
Categories: Fiction
Type: BOOK - Published: 2009-09-26 - Publisher: Hachette UK
Duncan MacLeod, member of an age-old race of immortal beings, is in Paris helping a friend organize a museum exhibit of ancient cultures destroyed by the Romans. While unwrapping a priceless scroll of the Torah, Duncan remembers Avram Mordecai, a young Immortal who was determined to see the Romans defeated

Authors: Jo Thornely
Categories: True Crime
Type: BOOK - Published: 2020-07-21 - Publisher: Hachette Australia
'a smart, daring and refreshing book' - Weekend Australian 'deliciously sinister' - Herald Sun Why would anyone join a cult? Maybe they're unhappy with their current religion, or they want to change the world, or they're disappointed with their lives and want to find something bigger or holier that makes

Half-Life of a Zealot

Authors: Swanee Hunt
Categories: Biography & Autobiography
Type: BOOK - Published: 2006-09-13 - Publisher: Duke University Press
Swanee Hunt’s life has lived up to her Texas-size childhood. Daughter of legendary oil magnate H. L. Hunt, she grew up in a household dominated by an arch-conservative patriarch who spawned a brood of colorful offspring. Her family was nothing if not zealous, and that zeal—albeit for more compassionate causes—propelled