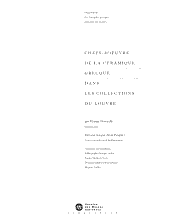 The Colors of Clay

Authors: Beth Cohen
Categories: Art
Type: BOOK - Published: 2006 - Publisher: Getty Publications
"The catalogue ... is truly excellent and makes an important contribution to the study of Greek Art." --Bryn Mawr Classical Review "An overwhelming volume. The subject matter ... is described in great detail in nine chapters. Essential." --Choice This catalogue documents a major exhibition at the Getty Villa that was the first ever to focus on ancient Athenian terracotta vases made by techniques other than the well-known black- and red-figure styles. The exhibition comprised vases executed in bilingual, coral-red gloss, outline, Kerch-style, white ground, and Six's technique, as well as examples with added clay and gilding, and plastic vases and additions. The Colors of Clay opens with an introductory essay that integrates the diverse themes of the exhibition and sets them within the context of vase making in general; a second essay discusses conservation issues related to several of the techniques. A detailed discussion of the techniques featured in the exhibition precedes each section of the catalogue. More than a hundred vases from museums in the United States and Europe are described in depth.

Authors: John Oakley
Categories: History
Type: BOOK - Published: 2014-08-31 - Publisher: Oxbow Books
Athenian Potters and Painters III presents a rich mass of new material on Greek vases, including finds from excavations at the Kerameikos in Athens and Despotiko in the Cyclades. Some contributions focus on painters or workshops Ð Paseas, the Robinson Group, and the structure of the figured pottery industry in Athens; others on vase forms Ð plates, phialai, cups, and the change in shapes at the end of the sixth century BC. Context, trade, kalos inscriptions, reception, the fabrication of inscribed paintersÕ names to create a fictitious biography, and the reconstruction of the contents of an Etruscan tomb are also explored. The iconography and iconology of various types of figured scenes on Attic pottery serve as the subject of a wide range of papers Ð chariots, dogs, baskets, heads, departures, an Amazonomachy, Menelaus and Helen, red-figure komasts, symposia, and scenes of pursuit. Among the special vases presented are a black spotlight stamnos and a column krater by the Suessula Painter. Athenian Potters and Painters III, the proceedings of an international conference held at the College of William and Mary in Virginia in 2012, will, like the previous two volumes, become a standard reference work in the study of Greek pottery.