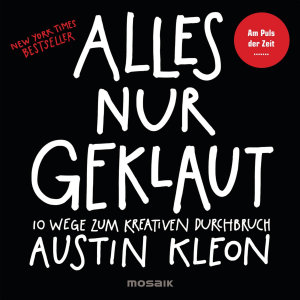 Authors: Blake Hanson
Categories: Self-Help
Type: BOOK - Published: 2018-04-25 - Publisher: Createspace Independent Publishing Platform
In this 2012 book, author Austin Kleon approaches an often-considered taboo subject of the world of creative works: copying another's work. While most consider the idea of copying another's style or design to be wrong, Austin says it doesn't have to be. Instead, Kleon suggests that the best creative ideas come from building off of ideas that others have already had. Kleon suggests that creativity is everywhere and is for everyone, so even if you don't feel like you are as great of an author, painter, photographer, or whatever your chosen medium may be, you should still learn from the best and try your best to imitate their work. This, he says, is how everyone finds their own individual style. While discussing what he calls "the inevitability of influence," Kleon tells his readers to "live outside the vacuum," and just to have fun with their art. He says there is no such thing as an original idea in today's creative world. Instead, every artist is merely taking ideas from one another and adding their own stylistic elements. "You don't need to be a genius," he says. "You just need to be yourself." Throughout the book, which is organized into eleven

Authors: Austin Kleon
Categories: Games & Activities
Type: BOOK - Published: 2015-10-06 - Publisher: Workman Publishing
From the New York Times bestselling author of Steal Like an Artist and Show Your Work! comes an interactive journal and all-in-one logbook to get your creative juices flowing, and keep a record of your ideas and discoveries. The Steal Like an Artist Journal is the next step in your artistic journey. It combines Austin Kleon’s unique and compelling ideas with the physical quality that makes journals like Moleskines so enormously popular. Page after page of ideas, prompts, quotes, and exercises are like a daily course in creativity. There are lists to fill in—Ten Things I Want to Learn, Ten Things I Probably Think About More Than the Average Person. Challenges to take. Illustrated creative exercises—Make a Mixtape (for someone who doesn’t know you) and Fill in the Speech Balloons. Pro and con charts—What Excites You?/What Drains You? The journal has an elastic band for place-marking and a special pocket in the back—a “swipe file” to store bits and pieces of inspiration. Because if you want to steal like an artist, you need a place to keep your loot.