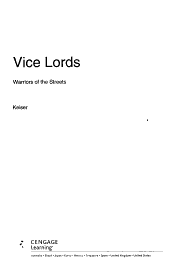 A Nation of Lords

Authors: David Dawley
Categories: Social Science
Type: BOOK - Published: 1992-03-01 - Publisher: Waveland Press
An instructive and relevant look at an explosive period in urban history! This savagely moving autobiography of a violent street gang covers its heyday in the 1960s when it had perhaps ten thousand members in at least twenty-six branches on Chicago’s West Side. It is the story of a street gang that became a community organization, supported by private foundations and corporations and dedicated to social, economic, and political development. The gang’s violent neighborhood was transformed into Head Start’s most improved block where the crime rate decreased as did the number of gang-related killings.

Authors: Arthur J. Bilek
Categories: Biography & Autobiography
Type: BOOK - Published: 2008 - Publisher: Cumberland House Publishing
THE FIRST VICE LORD is the story of the life and death of Big Jim Colosimo and Chicago's infamous segregated red-light district--the Levee. For the first time, the true story is told of the colorful characters who peopled the Levee from the time of the Columbian Exposition to the Roaring Twenties, clearly the most colorful period in Chicago's history. The product of five years of research through Chicago daily newspapers, magazines, and periodicals, and books on the city's history, it documents the story as it occurred, with all of the sights, sounds, and smells of that lusty, unruly era. THE FIRST VICE LORD is the story of an immigrant Italian lad who grew up in the tenements of Chicago, where he worked first as a lowly street sweeper, then as a brothel operator and vice lord, and finally as the owner of the most famous restaurant of his day. His story is told against the backdrop of an open red-light district so famous it was known to the crown heads of Europe.

Extent of Subversion in the "New Left"

Extent of Subversion in the "New Left"

Authors: United States. Congress. Senate. Committee on the Judiciary. Subcommittee to Investigate the Administration of the Internal Security Act and Other Internal Security Laws
Categories: New Left
Type: BOOK - Published: 1970 - Publisher:
Books about Extent of Subversion in the "New Left"

Extent of Subversion in Campus Disorders